Meet Falkor the Luck Dragon. Measuring a whopping 13 feet long from nose to tail-tip and comprising several yards of fleece, fur, foam, and a full 10lb box of fiber fill stuffing, he is my largest custom build to date. But what could have possibly possessed me to tackle such a gigantic project? Well, it all started last year on Facebook…

One of my best friends, Beckie, shared a picture of an art-doll of Falkor from the Never-Ending Story and asked if anyone she knew had the skills to make her one like it. As a doll-maker myself, I fully appreciate the time and skill it takes to create even a small reproduction, but my love of a challenge drove me to step forward and suggest I could make something much, MUCH bigger for less than the price of the small one.

Now, it is worth noting that this was a project of insanity and love, AKA – not for profit. This is a strictly one-of-a-kind creation and I would never attempt reproducing him to sell. The payoff in making him was all the knowledge I acquired along the way and seeing people’s delighted reactions when he was completed. 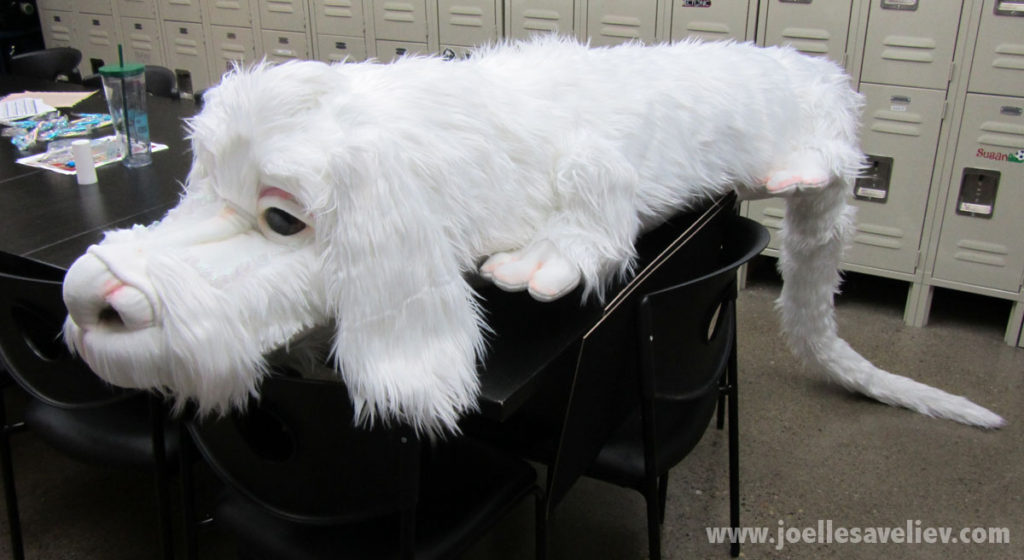 All throughout his production I snapped photos documenting the various stages of development and I want to share those with you today along with info about how he was assembled. Hopefully this will give you some inspiration for your own projects or at least a fun glimpse into how to build your own Luck Dragon!

Starting out, I referenced photos and movie stills of Falkor. A good front-view and side-profile gave me a structure to base my proportions on as well as to block out basic shapes and simplify construction. I considered going with soft sculpture but was concerned the face would become distorted over time. Instead, I opted for a hollow internal framework that would reduce the overall weight while maintaining the shapes and details. At this point I wasn’t yet sure what size he was going to be so I headed to my job at a local craft store for some inspiration.

While out on the floor I got my hands on an embroidery hoop and as I was fiddling with it, rotated the inner hoop outward, creating the basic structure for a sphere. I grabbed a 12in hoop before heading home along with several sheets of plastic canvas – these would create the hollow base for my head.

I returned to my reference photos now, calculating their measurements to a 12inch head diameter, and scaling all of the other elements accordingly. The framework was assembled with hot glue and wire to “sew” the plastic canvas and hoops together. Then, green upholstery foam was layered over the top to create the more sculptural aspects of Falkor’s face including his brows, nose, and lips.

His eyes were a unique challenge once I had settled on the scale of his head. I had considered casting them from resin, sawing apart plastic ornaments, and even sculpting them from apoxie but by some miracle I came across an Etsy seller with massive 60mm safety eyes. After they arrived I lightly sanded the glossy surfaces and hand-painted them with brown, black, gold and bronze acrylic paints. They were sealed with gloss spray and came out looking fairly screen accurate with a tiny glimmer of magic.

At this point, I was ready to move on to the messiest part of the build – fur. I took some steps to curb the amount of fluff that would be floating around. Parting the fur, inserting the scissors under the fibers, and removing any severed strands after cutting all helped to minimize the excess of fur in my work area but I still had to make several passes with the lint roller before moving around and  shedding like a polar bear.

I layered ultra-plush fleece onto his face first using a combination of hot glue and hand stitching to cover the more skin-like areas including his eyelids, followed by the super-thick white shag fur which was trimmed to create a more natural appearance. He also gained some scaling at this point with an opalescent shimmery mesh fabric that was ruched and hand-sewn on the sides along his snout. As a final touch, I scraped some chalk pastels onto a plate and applied them to areas of the fleece to create stronger shadows and a bit of blush around the nostrils, eyes, and lips.

His body construction was fairly straightforward as he is primarily a giant pillow. I created a massive cylinder by seaming a long rectangle of fur to fleece giving him a nice soft belly, and then created more sections which gradually tapered to form his tail. From there, I sewed L-shaped legs with a fur upper and tinted fleece with toes for the feet that were then stuffed and hand-stitched onto the sides of the body.

After attaching his ears, which were again fleece backed fur, I carefully rolled him, hand-stitching the fabric at the base of his head to the neck, making two passes to ensure everything was on nice and snug.

Now one thing I hadn’t considered was how on earth to transport a 13ft dragon! More than once I considered tying him to the roof rack and watching the looks as he flew down the road! Thankfully, once I put the seats down he settled in quite nicely and was on his way to his new home.

It was so awesome to see the reactions of my coworkers when I dropped him off and my they had a blast posing with him. Even better still was when Beckie took him home to her adorable nephew Caiden. They’re totally best buds – a life of Never Ending adventures for this boy and his Luck Dragon!